Many streets in various part of the world are considered must-see destinations. There is theopulent elegance of Champs Elysees, thecharm and romanticism of Unter den Linden, the gay abandon of Bourbon Street, the quirky crookedness of Lombard Street,the poignant religiosity of Via Dolorosa, but College Street in Calcutta makes the ranks of “BestLiterary TreasureHunt of Asia”, not by any grandeur or trendiness, but by its extraordinary cultural ambiance.

College Street or “Boi Para” is aunique 1.5 km street in Central Calcutta. It is the preeminent “adda” of Kolkata’s intelligentsia. Dotted with shanty stallsfilled with books old and new from every part of the world it is truly a book- lover’s paradise. The advent of the internet has made no dent in its popularity and if at all has enhanced its worldwide recognition. It lends the city of Kolkata,the self- styled thought leader of India, aunique flavor. Indeed, in Mumbai you may see the jewelry shops of Jhaveri Bazar overflowing with moneyed consumers, or the vendors at Chandini Chowk in Delhi overrun by bargain hunters and even Chennai hasthe old world of charm of Marina Beach Road, but the Calcuttan displays his true personality by thronging the shops and pavements of College street, browsing for hours on end, man, woman or child, rich or poor, rubbing shoulders, in pursuit of that coveted tome.

I was aware of its reputation as aglobal book market where you can get all kinds of books both old and new and occasionally rare editions at throwaway prices. I knew itas the second largest book market in the world and the largest book market in India. Both curious and skeptical, I entered a small makeshift book shop constructed of bamboo wood and canvas, lined with books, but which would barely allow two customers to stand abreast at the counter.  I asked for a rare volume of Bankim Chandra’s works. Much head – shaking and eye rolling by my local hosts, but the storekeeper nudged his little boy helper whocould not have been more thanten years old.  The little boy took off in a trice and fifteen minutes laterran back, the desired volume clutched to his chest. CollegeStreet had passed my test with flying colors!

College Street was known as The Great Arterial Road during the Governorship of Lord Wellesley who introduced the construction of planned roads in the early 1800s. The Hindu College was established there in 1817 by a British individual – David Hare who wanted to set up an institution that would provide liberal education to the children of the Hindu community. This idea was supported by eminent figures of the Hindu community like Babu Buddinath Mukherjee and Sir Edward Hyde, then chief justice. The Hindu college was established with twenty scholars and the street came to be known as College Street.Walking down the street you encounter renowned academic institutions such as University of Calcutta, Calcutta Medical College, Presidency College, Sanskrit College, Hare School and Hindu School. Famous publication houses -Ananda publishers of Ananda Bazar Patrika fame, Abhijan Publishers, Dey’s publishing are located here.

The strains of Manna Dey’s famous Bengali song “coffee house er shei adda ti…..” highlights another famous landmark on College Street. This is the famed “ Coffee House”the rendezvous site of luminaries such as RabindranathTagore, Subhash Chandra Bose, Satyajit Ray, Amartya Sen, Mrinal Sen. On the rickety tables and chairs, many a poem or song or storyline has been composed.  It has been a hub for exchanging thoughts in art, culture and politics, and even today is thronged by students from the nearby institutions.

College Street has been the center of political activities ranging from the first session of Indian National Conference in 1883 held at Albert Hall of College Street that led to the founding of Indian National Congress in 1885, Netaji Subhash Chandra Bose held his political congregations there and it is said that even theNaxalite movement in Bengal had its roots here.

Next time you visit Kolkata visit College Street, – walk on the hallowed pavements, soak up the atmosphere and reflect on its past history, and realize that as long as there is a millingmultitude of ardent readers on this street, there is hope for betterment in this world. 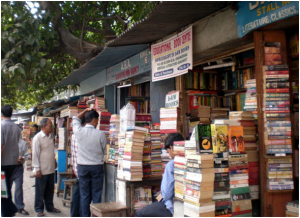