The fabric of healthcare in any nation is inextricably woven by its social, cultural, and economic threads. While we, in one of the richest and arguably the most powerful nation in the world, are grappling with our unique problems, with healthcare documentation becoming a priority over healthcare delivery, it is sometimes enlightening to pause and look around at other countries in the world, big and small, and evaluate what is happening beyond our shores. Comparisons are both odious and irrelevant  given the vastly diverse characteristics of nations in different continents, but one may obtain precious pearls of wisdom from experiences in some of the most severely challenged areas of the world.

Rwanda is a tiny landlocked country in east central Africa.Most people have heard of Rwanda in connection with the genocide that decimated the country for three months in the spring of 1994when a million people were killed, two million fled the country; thousands were maimed by machete welding thugs in a conflict between the majority Hutus and minority Tutsis. The use of war- rape caused a spike in HIV infection in women and childrenwith many others left simply orphaned. The destruction of infrastructure and severe depopulation crippled the country and challenged the nascent subsequent government to achieve reconciliation amongst its population and stabilization. A Rwandan born then had a life expectancy that was barely long enough for a mother to see her children become teenagers. During this time the West supposedly adopted a “hands – off “approach and even subsequent aid was minimal as it was perceived to be futile.

Today Rwanda is an exhilarating place to visit, to see the mesmerizing mountain gorillas families in their misty  habitat in the Parc du Vulcans – part of the Virunga mountain range which straddles Rwanda Uganda and Democratic Republic of Congo. There are only about 800 of this species left and trekking the 2500 metres to see these apes who share 98%of our DNA and have uncanny human–like expressions and gestures, is a mind – boggling experience. Facilities for this trek from the Rwandan side is both safe and first- rate.

What one may fail to note in the excitement of the gorilla encounter is that Rwanda’s health system developmenthas led to the most dramatic improvements in health in history. Rwanda is the only country in Sub- Saharan Africa poised to meet the Millennium Development Goals. Deaths from HIV,TB,and Malaria have dropped by 80% over the last decade, maternal mortality ratio dropped by 60%and annual child deaths have fallen by 63%.Rwanda now is a model for replicable healthcare with limited resources.

Make no mistake, the healthcare system is still strained and inadequate, but the overall gain is spectacular. The system is financed both by state funds and by individual’s contribution through direct fees and health insurances. The largest is the community based Health Insurance Scheme where members pay annual premiums of US$6 per family member with a 10% service fee paid for each visit to a health center or hospital.

The future is unpredictable, however today the Rwandan proudly calls himself so and refuses to identify himself as a Hutu or Tutsi. The word on the street is that corruption will not be tolerated. They point to the cleanliness of their cities and villages, as each area is responsible for maintenance of the same with cleanliness programs being run at suitable intervals. Even the tourist is not allowed to bring any plastic bags at the airport- all containers andwrappers at stores being biodegradable. Kigali, the capital is rapidly becoming an IT center for Africa; “Girinka” is an agricultural project in which the government gifts apregnant cow to poor and vulnerable household in the village and the beneficiaries pass the first female offspring to the next poor and malnourished family approved by community leaders.These families are able to get nourishment from the milk and sell the surplus- this gift of cow so akin to “Go-daan” in India is the most appreciated expression of goodwill and by this culturally sensitive gesture the government has obtained the spontaneous and openhearted cooperation of the villagers. 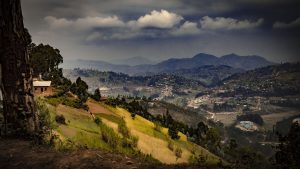