The man of my heart dwells inside me/ everywhere I look it is he/ In my every sight, in the sparkle of light/ Oh, I can never lose him-/here, there, everywhere/whereverI turn he is right there……

Woven intricately into the colorful tapestry of our Indian cultural heritage are many sects who belong to the fringes of mainstream society. They are often marginalized, and it takes an enlightened soulto bring them out of obscurity.

The poem above by Rabindranath Tagore is heavily influenced by the Baul ideology. The Bauls are a sect of wandering, musical minstrels belonging to West Bengal, parts of eastern Bihar, Jharkhand, and Bangladesh.Though miniscule in number, their influence on the Bengali culture is considerable.In 2005 the Baul tradition was included in the list of “Masterpieces of Oral and Intangible Heritage of Humanity” by UNESCO.

The Baul ethos is a combination of a musical culture, non- traditional lifestyle and unique spirituality. “Baul” (Baa-OOL) refers to three terms – “Betul”, which means mad, outof rhythm, “Vayu”- air or inner flow of energy and “Auliya” – Arabic for holy man. They may come from a Vaishnav Hindu or a Muslim Sufi background and they are constantly in search of the “Adhar Manush” or the “Essential Man,”the inner being inside of each human body –which is therefore sacred-thereby encompassingthe concept of“deha tattva”- and achieve a spiritual ecstasy through dance and song. These free spirited bands or individuals wander from village to village composing their music  and accepting alms for the maintenance of everyday life only,clad in their patchworksaffron colored alkhalla, uncut,coiled hair, carrying their musical instruments- the ektara or dotara, duggi, khol and dhol, gunghur and nupur, khartal and manjira.

Baul beliefs are derived from many sources and are considered a syncretic religion with elements of Tantric Buddhism, Sufism, Vaishnavism – focusing on the relationshipbetween Krishna and Radha, and its tantric offshoot Sahajiya Vaishnavism and Shakta religion, the worship of the goddess. There are two categories -the ascetic Baul who renounces family life, lives on alms and may move from one akhada to another, and may have multiple female companions orsevadasis, and those who choose to have a family.Men and women may live together,sometimes as spiritual partners, and have their own hidden tantric rites -worship of the body and certain secret sexual practices are considered roads to divine ecstasy.

They do not believe in the caste system or clergy, nor do they visit temples or mosques, or perform traditional religious rituals. Their lyrics hold deeper meanings than the obvious.Osho, also known as Rajneesh has written a remarkable treatise on the Bauls and writes “They believe that man is the Shrine of God. They believe in the body…. All other religions are body negative- Bauls sayif youdestroy the body you destroy your sensitivity to perceive Him. Unlike some who renounce this world to achieve moksha in the next, the Baulrenounces because he sees the foolishness and unnecessary burdening of worldly possessions- he says this is the only world- the more you have the less you enjoy.”

The Bauls belong to the oral tradition; Lalon Fakir (1770-1890) the greatest of all Bauls, composed over 5000 songs – never stopping to put them on paper. Kazi  Nazrul Islam and Tagore have acknowledged the Baul influence on their own works and the Baul message of non- sectarian devotion and universal love. Tagore was exposed to Baul songs during his stay in areas like Khustia, Siraganj,Noagaon, in present Bangladesh while looking after his father’s estate. He called himself Rabindra Bauland namedthose songs “RabindraBaul er Gaan” which remain to this day immensely popular. The tune of “Amar SonarBangla” the national anthem of Bangladesh is influenced by a Baul song “Aami kothay pabo tare”.

Every year in the month of Falgun, February to March “Lalon Smaran Utshab” is held in the shrine of Lalon in Khustia in Bangladesh where Bauls from all corners congregate; in Shantiniketan during Poush Mela a large number of Bauls gatherand perform – the Birbhum district being one of the original centers of Baul culture.In the village of Jaydev Kenduli a fair is organized in the memory of poet Jaydev during Makar Sankranti, and in Kolkata there is the two dayBaul Fakir Utsav.A Bangladeshi organizationPalli Baul Samaj Unnayan Sangsthahas a mission of upholding Baul traditions and there are centers for Baul teachings in Bangalore andin Kerala.

Today Baul music is experiencing resurgence, taking this genrebeyond the confines of rural Bengal, as their simple pacifist philosophy reverberates in an increasingly turbulent world. 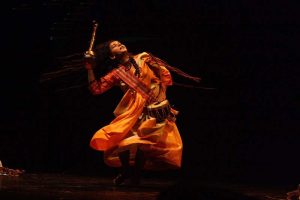