A Bengali household without a Jamini Roy inspired object d‘art is indeed a rarity; whether it be a print or poster, calendar or cushion cover, saree border or mug, the influence of this Bengali Master – “a patua” as he liked to call himself, is ubiquitous. As such, he accomplished his expressed desire – to be an artist for the masses.

My quest for an original Jamini Roy painting in the early 90s led me to a little known art gallery in the suburbs of Delhi, in the company of a local art connoisseur. There we beheld an 8” by 10” painting of a cow on a piece of cardboard- black and blue and vermillion hues with the bold and elegant brush strokes, elongated iconic eyes which defined the master’s work. The painting was simple but riveting; frayed  edges of the cardboard showed its age- was it an original? It was unsigned. Jamini Roy left many unsigned pieces when he died and during his lifetime he was wont to sign his pieces just before a sale. Supposedly, some of his pieces were being quietly sold off by his descendants from time to time. It would come with a certificate of authenticity, we were assured. But as is said, there are more fake authenticators than fake paintings in India. The price was $5600 a far cry from the Rs. 375 to Rs. 750 that Jamini Roy sold his paintings for, ensuring they were affordable to the middle class “Bhadra-lok”.

I did not buy the painting after all. What I learnt was that all Jamini Roy paintings are considered “national treasures” and taking them out of the country would be essentially “smuggling” a work of art.

Jamini Roy is the celebrated face of the Modern Indian Art movement. Born April 11th 1887 to an upper class zamindar family in Beliatore village of Bankura district of West Bengal; His father Ramratan Roy was an amateur artist himself, who retired from his government job to stay with the potters of Beliatore.Perceiving his son’s burgeoning talents,Jamini was enrolled in the Government  Art College in Kolkata under the tutelage of Abanindranath Tagore who was then vice- principal there.Jamini became a favorite pupil of Abanindranath, an artist himself,and excelled in landscapes and portraiture of the old Bengali school which was heavily influenced by the West.

However the young Jamini was restless; perhaps inspired by the nationalist movement of the 1920s and the street paintings of the “patuas,” at the Kalighat temple who sold religious paintings to devotees, he moved away from the old school to capture his own unique vision of Indian art.

His goal was threefold- to capture the simplicity of local rural life including the Santhal tribes, to make art accessible to every section of the community and to create an identity that was uniquely Indian to the world. He abandoned expensive canvases and painted on ‘pat’, cardboard, wood slats, cloth. His colors were seven- Indian red, yellow, cadmium green, vermillion, grey, blue and black. He used cheap indigenous, vegetable pigments and drew lines with lamp black and chalk. The mastery ofclean brush strokes,the elegant austerity of expression, and the deceptively simple subjects taken from the everyday Indian esthetic were unparalleled.

“I cannot paint like the Chinese, Persians or Mongols….for I am not in that atmosphere. Therefore I have to search for my way out of my own quest. My aim is to have a different style” he said.

Jamimi Roy was aprolific painter painting over 20,000 pieces, many unsigned. He could not be categorized to a period as he painted many different styles at the same time. Unlike many other painters he achieved great success in his lifetime, having shows all over the world. His paintings were appreciated by Indians and westerners alike. Volumes have been written regarding his style- and he has been likened to Matisse and Japanese artists, however the magic of his brush strokes and color are his own unique compositions.

He had a major exhibition on British India Street in Calcutta in 1938 and others in London and New York and every major art gallery and museum vie topossess a Jamini Roy. In 1954 he was awarded the Padma Bhushan- his co awardee that year was MSSubalakshmi – only two in the arts that year.He was the first fellow of the Lalit Kala Akademi and received innumerable accolades. He could have sold his art for millions but chose to sell them atnominal prices out of his home Ballygunge Place in Kolkata where his family still lives, part of which has become a museum.

He is the most copied of Indian artists and the undeniably the most identifiable. If copy is a form of flattery he is at the top of the list. He probably would not have minded his art being reproduced- he wanted every Indian to rejoice in his art form. A meticulous and tireless worker he would say”Peace is not for the artist, how can that happen?The mind strives and burns all the time in the creative activity of art”. He died in 1972at the age of 85, but has left us with his indelible artistic legacy. 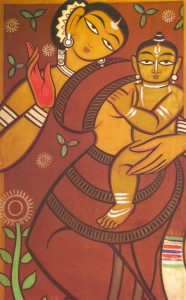 SUMMER SAVOURIES: Trip Down A Gastronomic Memory Lane
A plethora of booths show casing Indian Jewelry is a feature of every convention of Indian heritage